History of the club

Home › Club › History of the club

There has been two different Curling Clubs here in Canmore. The old Curling Rink was located on the other side of Bow Bridge where the duplex’s are now located. It consisted of 3 sheets of natural curling ice.

Members remember the flooding that would occur on warm days and the challenges natural ice gave while trying to make the perfect shot. In 1988 the old Curling Rink was taken down since it was on town land and the Canmore Curling Club was created for the 1988 Winter Olympics. Orginally it was the athletes village during the Olympics and then was transformed to the Rink it is now today.

The offical Opening Cermonies of the Curling Club was held on Saturday, October 29, 1988. Ken Ritchie, who is still a current Curling member, had the honour of throwing the first rock and Randy Nichols, also still a Curling Member, had the honour of cutting the Ribbon. This Club is proud of it’s history and where it all began. It shows in the length of some of our Curling Members who have been a part of our Club since the very beginning.

Although our Curling Ice is taken out in the Summer if you are in Canmore during the months of October – March come down Monday – Friday in the evening and check out the Sport that is taking the World by Storm! 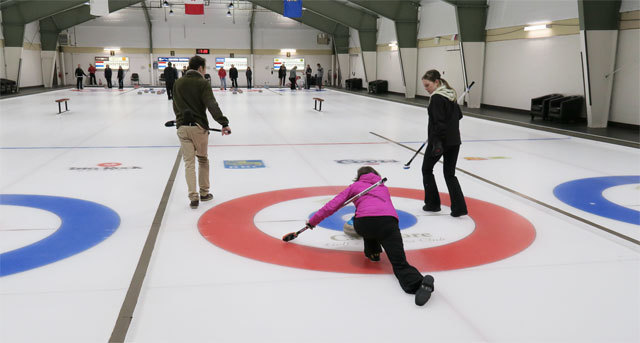